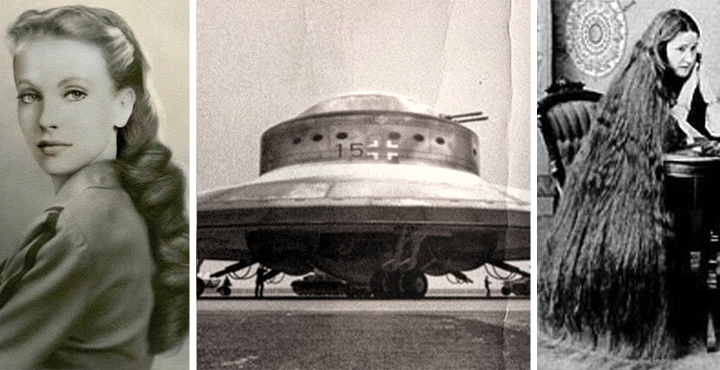 Maria Orsitsch, also known as Maria Orsic, was a famous medium who later became the leader of the Vril Society – Vril Gesellschaft.

She was born in Vienna (Austria). Her father was a Croatian from Zagreb, her mother was from Vienna. Maria soon followed the German national movement which was popular at this time; the main goal of the movement was to annex Austria with the German Reich.

In 1917 the occultist Karl Haushofer, Baron Rudolf von Sebottendorf, the WWI ace pilot Lothar Waiz, prelate Gernot of the secret “Societas Templi Marcioni” (The Inheritors of the Knights Templar) and Maria Orsic, a transcendental medium from Zagreb, met in Schopenhauer cafè© in Vienna.

They all had extensively studied the Golden Dawn, its teachings, rituals, and especially its knowledge about Asian secret lodges. Sebottendorf and Haushofer were experienced travelers of India and Tibet and much influenced by the teachings and myths of those places. During the First World War, Karl Haushofer had made contact with one of the most influential secret societies of Asia, the Tibetan Yellow Hats (dGe-lugs-pa). The contact between Haushofer and the Yellow Hats led in the Twenties to the formation of Tibetan colonies in Germany.

The four young people hoped that during these meetings in Vienna they would learn something about the secret revelatory texts of the Knights Templar and also about the secret fraternity Die Herren Vom Schwarzen Stein (The Lords of the Black Stone). Prelate Gernot was one of the Inheritors of the Knights Templar, which is the only true Templar society. They are the descendants of the Templars of 1307 who passed on their secrets from father to son until today. Prelate Gernot apparently told them about the advent of a new age the change-over from the Age of Pisces to the Age of Aquarius.

In December 1919 members of Thule, Vril, and “Die Herren Vom Schwarzen Stein” (The Lords of the Black Stone) rented a small hunting lodge in the vicinity of Berchtesgaden (Germany) where they met, accompanied by Maria Orsic and another medium who is only known as Sigrun. Maria claimed to have received telepathically transmissions in a secret German Templar script – a language unknown to her – containing technical data for the construction of a flying machine. Vril documents mention these telepathic messages had their origin in Aldebaran.

I talked about Aldebaran in our previous podcast, you can listen to that and, you can find out more about Aldebaran, a solar system, basically 68 years away in the constellation Taurus.

She had two piles of papers: one with the Templar script, the other with legible writing. Maria suspected the second pile would be written in an ancient eastern language and therefore she could be aided by the “Panbabylonists”, a circle close to the Thule society which was integrated by Hugo Winckler, Peter Jensen, Friedrich Delitzsch, and others. It turned out that the apparently mysterious language was actually ancient Summerian and hence the language of the ancient Babylonian culture founders. Sigrun, from the Vril Gesellschaft helped translate the language and decipher the strange mental images of a circular flight machine.

The concept of other science (or alternative science or secret science) matured in this time and the following years. Because of the financing difficulties, it took three years until the flying machine project started taking shape. By 1922, parts for the machine began arriving independently from various industrial sources paid in full by Thule and Vril.

In Munich, Maria was in contact with the Thule Gesellschaft and soon she created her own circle together with Traute A. from Munich and several other friends: the “Alldeutsche Gesellschaft für Metaphysik”, the official name of the Vril Gesellschaft. All of them were young ladies who, which among other things were against the arising fashion of short hairstyles for women. Both Maria and Traute were beautiful ladies with very long hair; Maria was blond and Traute was brown-haired. They had long horse tails, a very uncommon hairstyle at that time. This became a distinctive characteristic in all the women who integrated Vril which was maintained till May 1945. They believed that their long hair acted as cosmic antennae to receive alien communication from beyond. In public, however, they hardly ever exhibited the hair in horse tail style. For identification, Vril members (also called Vrilerinnen) wore a disk that represented the two mediums: Marija Oršić and Sigrun.

In late November 1924, she visited Rudolf Hess in his apartment in Munich, together with Rudolf von Sebottendorf, the founder of the Thule Gesellschaft. Sebottendorf wanted to contact Dietrich Eckart, who had deceased one year before. Eckert had translated Ibsen’s plays into German and had published the magazine Auf gut Deutsch; he had also been a member of the Thule Gesellschaft. To establish contact with Eckart, Sebottendorff and other Thulists (amongst them Ernst Schulte-Strathauss) joined hands around a black-draped table.

Hess was irritated to watch Maria Orsic’s eyeballs rolling back and showing only whites, and to see her slumping backward in her chair, mouth agape. However, Sebottendorff smiled in satisfaction as the voice of Eckart started coming out of the medium. Eckart announced that he was obliged to let someone else’s voice come through, with an important message. A weird voice then identified itself as the Sumi, dwellers of a distant world, which orbits the star Aldebaran in the constellation you call Taurus the Bull. Hess and Schulte-Strathaus blinked at each other in surprise.

According to the voice, the Sumi were a humanoid race who had briefly colonized Earth 500 million years ago. The ruins of ancient Larsa, Shurrupak, and Nippur in Iraq had been built by them. Those of them who survived the great flood of Ut-napishtim (the Deluge of Noah’s Ark) had become the ancestors of the Aryan race. Sebottendorff remained skeptical and asked for proof. While Maria was still in a trance, she scribbled several lines of queer-looking marks. Those marks turned out to be ancient Summerian characters, the language of the founders of the oldest Babylonian culture.

In December 1943 Maria attended, together with Sigrun, a meeting held by Vril at the seaside resort of Kolberg. The main purpose of the meeting was to deal with the Aldebaran project. The Vril mediums had received precise information regarding the habitable planets around the sun Aldebaran and they were willing to plan a trip there. This project was discussed again on the 22nd of January 1944 in a meeting between Hitler, Himmler, Dr. W. Schumann (scientist and professor at the Technical University of Munich), and Kunkel of the Vril Gesellschaft. It was decided that a Vril 7 Jaeger would be sent through a dimension channel independent of the speed of light to Aldebaran. According to N. Ratthofer (writer), the first test flight in the dimension channel took place in late 1944.

Maria Orsic disappeared in 1945. On the 11th of March of 1945, an internal document of the Vril Gesellschaft was sent to all its members; a letter written by Maria Orsic. The letter ends: “niemand bleibt hier”. This was the last announcement from Vril. It is speculated they departed to Aldebaran.

It was rumored that an American expedition to Antarctica was launched. It was wildly known that Americans sought Nazi technology after the defeat of the Germans. Although the Antarctica expedition known as operation high jump proclaimed, their objective was to study Antarctica many believe Admiral Richard birds. The true objective was to flush out Germans in Antarctica and capture alien UFO technology. The expedition began in 1945 and ended abruptly in March 1947, two months later, the world received the first reports of a modern-day UFO, 1947, Kenneth Arnold in Washington estate, maybe 20 minutes from the place that I’m recording this podcast for you.