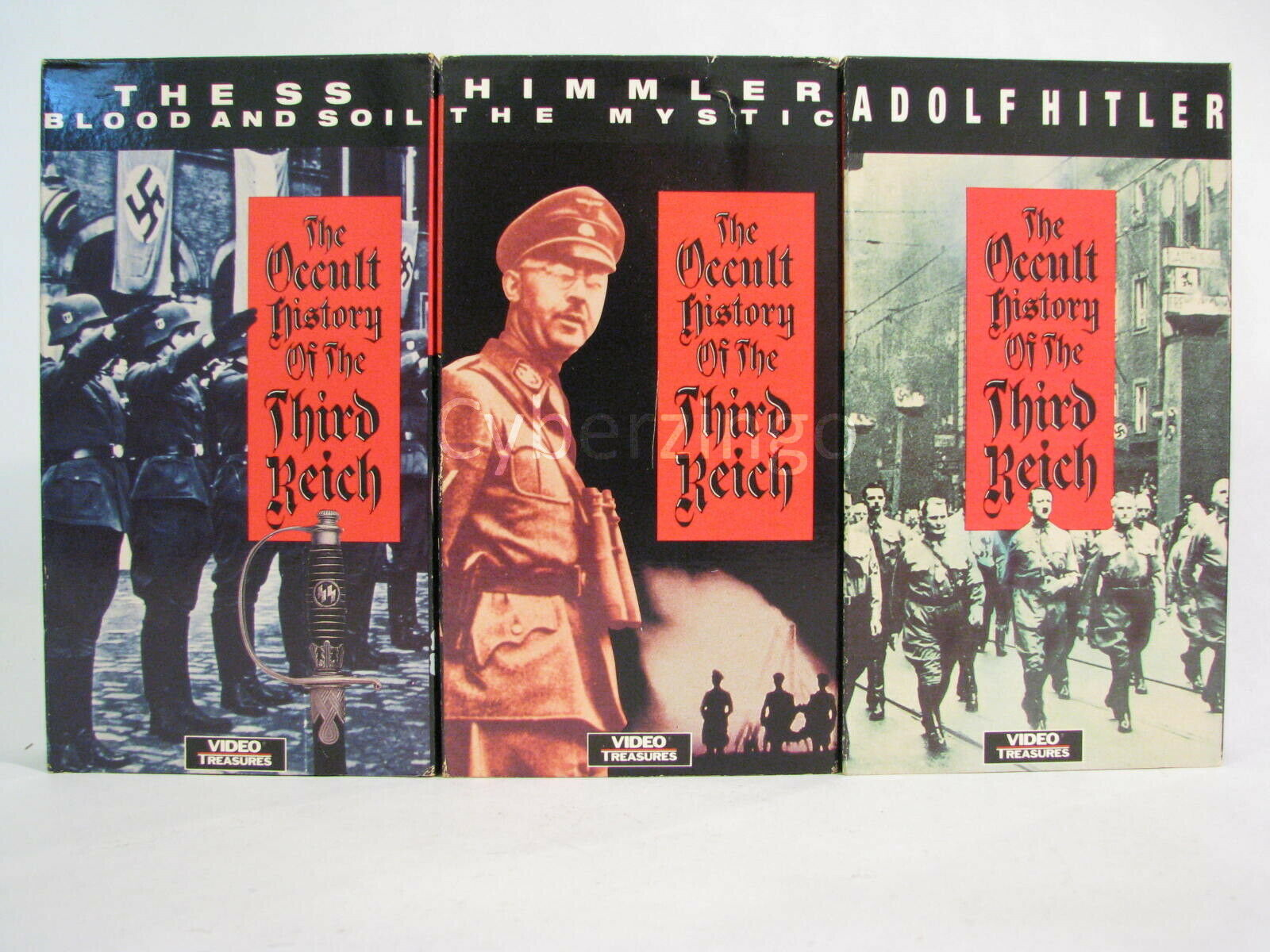 Since the end of World War II, conspiracy theorists began formulating theories about the secret occult practices of the Third Reich.

It was obviously fueled by leaked reports of German, secret societies, amazing technologies, underground facilities, otherworldly, visitations, and lost lands. These so-called Esoteric Hitlerists like Savitri Devi, Robert Charroux, and Miguel Serrano have made some astounding discoveries and formulated amazing theories as to the true nature and depth of Nazis’ fixation with ancient civilizations’ occult practices, and top-secret projects. What we know for certain is that the top echelon of the national socialist party was deeply invested in and also involved in esoteric practices and German secret societies 19th-century movements like, uh, Theosophy, and Ariosophy. The other interesting point in looking into the occult in the Third Reich is that since the end of World War II tens of thousands of reports of unidentified flying objects, UFOs, uh, or as they call them today UAP, unidentified aerial phenomenon, and alien abduction have caused many to speculate whether we are being visited by extraterrestrial beings.

Yet an alternative explanation becomes more plausible, depending on how you look at these phenomena. And when we review the occult in Third Reich, we will see what this alternative view is. One might tend to discount a multitude of reports of alien abduction and UFO sightings, as a pop culture hoax though, the sheer overwhelming numbers of upstanding and respected people who have made these claims make a mass hoax seems implausible. You all have heard about the project blue and other projects that the United States government opened to research abductions and UFO sightings. And we all know at the end of those, even people involved in them, came out and said, this cannot all be a hoax. And remember, they were hired to debunk these sightings and these abductions and these phenomena, but in the end, they could not quite completely do that. Having said that, it seems just as implausible for the accounts of the anthropomorphic alien to have come from another planet.

As humans, we tend to anthropomorphize our idea of alien beings, assuming that they would be like us, but the reality is that an extraterrestrial from another planet with a totally different mixture of elements and its own pattern of evolution and environment, wouldn’t likely end up looking anything like the dominant form of life and a species on this planet on earth. Surely it would not be an upright walking by pedal, uh, vertebrae with two eyes, a nose and a mouth and, and enlarge cranium, et cetera, et cetera, basically, to look like a human. In other words, it would not resemble a humanoid. So if these hypothetical beings are not from another planet, where are they from and why do they look humanoid? Likewise, what is the connection of all this to the Third Reich? This is where we arrive at what is known as the hollow earth theory.

In another episode of a standup historian, I explained hollow earth theory, and I also introduced the book, the coming race. And you can go back and listen to that episode, but then, the theory of hollow earth, which is in fact, a rogue geological theory, uh, postulates that the earth is in fact hollow, as opposed to the current established scientific theory that the earth is filled with, uh, super-heated magma. In fact, science tells us that the earth has a core of superheated magma. Hollow theory predates our modern geological theories and actually goes back very far into antiquity. In the 18th, century Leonhard Euler a Swiss mathematician theorized that the earth was a single hollow sphere, which contained a central sun. And again, you can see a book by Jules Vern’s journey to the center of the earth, which talks about life inside the earth, the sun, and everything else.

So, you can see here that those stories, uh, get connected and come to one idea, which is the hollow earth. So he said, the earth has a central sun, 600-mile miles wide that provided heat and light for a civilization that lived within the earth. William Reed, author of the book, Phantom of the Poles published in 1906. This book provides the first compilation of scientific evidence based on the reports of Arctic explorers. In some parts of the theory that the earth is hollow with openings at its poles, Reed estimates that the crust of the earth has a thickness of 800 miles while its hollow interior has a diameter of 6400 miles. Reed summarizes this revolutionary theory as follows.

“The earth is hollow. The poles so long sought are Phantoms. There are openings at the Northern and Southern extremities in the interior are vast continents, oceans, mountains, and rivers, and vegetable and animal life are evident in the new world. And it is probably people by races, unknown to do others on the earth surface.”

By the late 19th century Hollow Earth was an accepted theory based on many mathematical calculations and observations such as the actions that centrifugal force counteracting, the force of gravity would have on the earth in 1870. Also, as I mentioned in a hollow earth and the coming race, Edward B Lytton also published his novel, uh, which was called the coming race. In this book he described the travels of a, uh, American Explorer and his encounter with the sub train race of creatures called the Vril-ya in his novel, he accounts for a mysterious energy force utilized by the subterranean race called Vril energy described as an all, all-permeating fluid of limitless power with the eastern concept of Prana or Chi. The theory goes that the people called Vril-ya are able to control this energy source with their minds, both to heal and to destroy. The novel depicts technologies designed by the Vril-ya that allowed them to focus the Vril energy.

And it was said that even a single Vril-ya child, that’s the very interesting part of it. When the visitor asks the people, how, how would you think you can defeat people on the surface? And in response, they say a single child has the power of leveling entire cities. The novel also reveals that the subterranean race was planning on expanding their territory, but taking over the surface via the destruction of humankind. So there are some keywords here, destruction of human kinds is one of those take note. If you’re listening, the concept of veil energy was given impetus in the mind of 19th century, Al by French author Louis Jacolliot. In his works, the sons of God and the traditions of the Indo-European Jacolliot claims that he encounter Vril energy among the Jaines in Mysore and Gujarat in India, while he was in French cons of Calcutta. the occult background of B Lytton and the writings of these two authors convinced many 19th century Alta, that Vril was a real mystical force. So these two characters, Layton, and Jacolliot with their writings had convinced a large number of, uh, thinkers and scientists. That Vril is a real force, and it’s not just medical.

Another important character here is Helena Blavatsky the founder of Theosophy. She endorsed this view in her book, ISIS unveiled, And again, in the secret doctrine, which is the most important and best-known work of Helena.