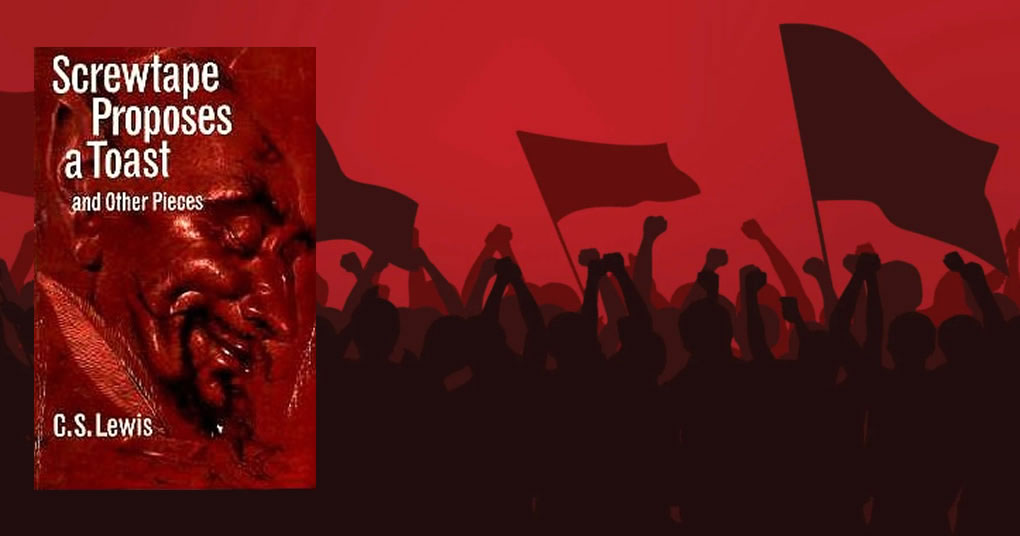 Listen to this article

These are excerpts from “Screwtape proposes a toast” essay by C. S. Lewis.
These excerpts address the issues and dilemma of Democracy how it leads to the dictatorship of the majority and the creation of personal envy and all-out evil, as we are witnessing around the world, in every country and society and every system of governing, which is supposedly “democratic.”

The scene is in Hell at the annual dinner of the Tempters’ Training College for young devils. The principal, Dr. Slubgob, has just proposed the health of the guests. Screwtape, a very experienced Devil, who is the guest of honour, rises to reply:

Let me recall to your minds what the human situation was in the latter half of the nineteenth century — the period at which I ceased to be a practising Tempter and was rewarded with an administrative post.

The great movement toward liberty and equality among men had by then borne solid fruits and grown mature. Slavery had been abolished. The American War of Independence had been won. The French Revolution had succeeded. In that movement there had originally been many elements which were in our favour. Much Atheism, much Anticlericalism, much envy and thirst for revenge, even some (rather absurd) attempts to revive Paganism, were mixed in it. It was not easy to determine what our own attitude should be. On the one hand it was a bitter blow to us — it still is — that any sort of men who had been hungry should be fed or any who had long worn chains should have them struck off. But on the other hand, there was in the movement so much rejection of faith, so much materialism, secularism, and hatred, that we felt we were bound to encourage it.

But by the latter part of the century, the situation was much simpler, and also much more ominous. In the English sector (where I saw most of my front-line service) a horrible thing had happened. The Enemy, with His usual sleight of hand, had largely appropriated this progressive or liberalizing movement and perverted it to His own ends. Very little of its old anti-Christianity remained. The dangerous phenomenon called Christian Socialism was rampant.

Factory owners of the good old type who grew rich on sweated labor, instead of being assassinated by their workpeople — we could have used that — were being frowned upon by their own class. The rich were increasingly giving up their powers, not in the face of revolution and compulsion, but in obedience to their own consciences. As for the poor who benefited by this, they were behaving in a most disappointing fashion. Instead of using their new liberties — as we reasonably hoped and expected — for massacre, rape, and looting, or even for perpetual intoxication, they were perversely engaged in becoming cleaner, more orderly, more thrifty, better educated, and even more virtuous.

Believe me, gentledevils, the threat of something like a really healthy state of society seemed then perfectly serious.

I heard the other day that in that country a man could not, without a permit, cut down his own tree with his own ax, make it into planks with his own saw, and use the planks to build a toolshed in his own garden.

Thanks to Our Father Below, the threat was averted. Our counterattack was on two levels. On the deepest level, our leaders contrived to call into full life an element which had been implicit in the movement from its earliest days. Hidden in the heart of this striving for Liberty there was also a deep hatred of personal freedom.

That invaluable man Rousseau first revealed it. In his perfect democracy, only the state religion is permitted, slavery is restored, and the individual is told that he has really willed (though he didn’t know it) whatever the Government tells him to do. From that starting point, via Hegel (another indispensable propagandist on our side), we easily contrived both the Nazi and the Communist state. Even in England, we were pretty successful. I heard the other day that in that country a man could not, without a permit, cut down his own tree with his own ax, make it into planks with his own saw, and use the planks to build a toolshed in his own garden.

Hidden in the heart of this striving for Liberty there was also a deep hatred of personal freedom.

Such was our counterattack on one level. You, who are mere beginners, will not be entrusted with work of that kind. You will be attached as Tempters to private persons. Against them, or through them, our counterattack takes a different form. Democracy is the word with which you must lead them by the nose.

The good work which our philological experts have already done in the corruption of human language makes it unnecessary to warn you that they should never be allowed to give this word a clear and definable meaning. They won’t. It will never occur to them that democracy is properly the name of a political system, even a system of voting, and that this has only the most remote and tenuous connection with what you are trying to sell them. Nor of course must they ever be allowed to raise Aristotle’s question: whether “democratic behaviour” means the behaviour that democracies like or the behaviour that will preserve a democracy. For if they did, it could hardly fail to occur to them that these need not be the same.

You are to use the word purely as an incantation; if you like, purely for its selling power. It is a name they venerate. And of course, it is connected with the political ideal that men should be equally treated. You then make a stealthy transition in their minds from this political ideal to a factual belief that all men are equal. Especially the man you are working on. As a result, you can use the word democracy to sanction in his thought the most degrading (and also the least enjoyable) of human feelings. You can get him to practise, not only without shame but with a positive glow of self-approval, conduct which, if undefended by the magic word, would be universally derided.
The feeling I mean is of course that which prompts a man to say I’m as good as you.

Democracy is the word with which you must lead them by the nose.

The first and most obvious advantage is that you thus induce him to enthrone at the centre of his life a good, solid, resounding lie. I don’t mean merely that his statement is false in fact, that he is no more equal to everyone he meets in kindness, honesty, and good sense than in height or waist measurement. I mean that he does not believe it himself. No man who says I’m as good as you believes it. He would not say it if he did. The St. Bernard never says it to the toy dog, nor the scholar to the dunce, nor the employable to the bum, nor the pretty woman to the plain. The claim to equality, outside the strictly political field, is made only by those who feel themselves to be in some way inferior. What it expresses is precisely the itching, smarting, writhing awareness of an inferiority which the patient refuses to accept.

I mean that he does not believe it himself. No man who says I’m as good as you believes it. He would not say it if he did.

Under the influence of this incantation those who are in any or every way inferior can labour more wholeheartedly and successfully than ever before to pull down everyone else to their own level. But that is not all. Under the same influence, those who come, or could come, nearer to a full humanity, actually draw back from fear of be ing undemocratic. I am credibly informed that young humans now sometimes suppress an incipient taste for classical music or good literature because it might prevent their Being Like Folks; that people who would really wish to be — and are offered the Grace which would enable them to be — honest, chaste, or temperate refuse it. To accept might make them Different, might offend against the Way of Life, take them out of Togetherness, impair their Integration with the Group. They might (horror of horrors!) become individuals.

All is summed up in the prayer which a young female human is said to have uttered recently: “O God, make me a normal twentieth century girl!” Thanks to our labours, this will mean increasingly: “Make me a minx, a moron, and a parasite.”