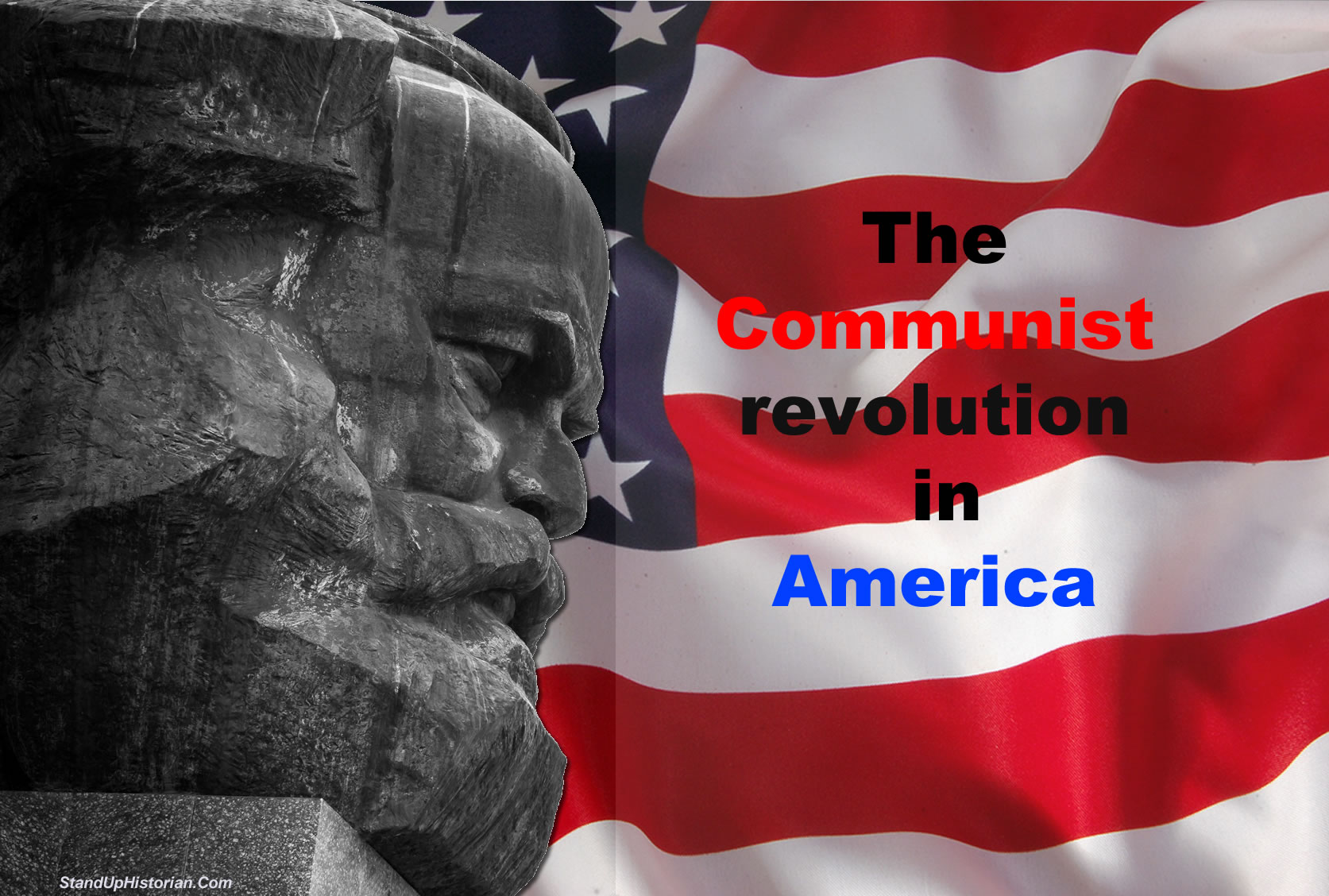 As we witness the riots, the burning of our cities, and vandalism of our monuments and statutes, we wonder what’s going on.

We see Antifa militia brutally attack anyone who shows respect for the country and its principals.

In the name of black America, groups such as Black Lives Matter participate in the most vicious acts of violence against even black people.

Businesses are robbed every day, and what’s left is set on fire.

Those who oppose the destruction of the country are labeled as Fascists and racists.

The answer is simple. Revolution.

What we see today is not new at all. In the past 60 years, there have been many attempts to topple the US government and replace it with a Marxist Communist regime.

The tactics are the same, however much more violent and brutal.

What is different this time around is that we have a major political party, namely the Democratic party, that supports and condones violence by the left and, in fact, promotes it.

For more than half a century, the Communists, under various titles, goals, and excuses, formed organizations to infiltrate the highest positions of power in the land in government, academia, and intelligentsia. They have been very successful. We had eight devastating years of Obama’s presidency.

The Democratic party has become a full-fledged socialist, a cover for the most hated word in the human lexicon, the Communism.

We always hear about the 6,000,000 Jews killed in the Nazi concentration camps, but hardly ever hear about the over 150,000,000 people who were slaughtered by the Communists!

We see characters like Bernie Sanders run for the presidency of the United States. These people don’t even try to hide the fact they are for a planned economy and socialist values. They stop at nothing short of a complete overhaul of every aspect of American life.

In this article, I will take you on a journey in time. We will investigate the roots of evil in years past, and we will see how we ended up here.

Remember, the past is the guiding light of the future.

I never forget December 25th, 1991. On that day, the Soviet Union’s fall became official when the USSR’s red flag was lowered, and the Russian flag was raised over the Kremlin palace.

For many in the world, it was the most significant moment in contemporary history.

The fall of the USSR ( Union of Soviet Socialist Republics) took by many as the fall of Communism; after all, the Soviet Union was the Communist world leader.

Before the collapse of the Soviet Union, Communist Russia was the leader of the Eastern bloc. The countries of central and eastern Europe were under Soviet domination from the end of World War II. This bloc included Poland, East Germany, Czechoslovakia, Hungary, Romania, Bulgaria, and Yugoslavia.

The Cold War was a geopolitical tension after World War II, between the Soviet Union and the United States and their allies, the Eastern Bloc and the Western Bloc.

The period is generally considered to span the 1947 Truman Doctrine to the Soviet Union’s dissolution in 1991.

During this time, the Soviets mastered the art of propaganda and disinformation. They, directly and indirectly, formed many leftist organizations inside the Western Bloc countries and, most notably, in the United States, to bring about the Communist revolution.

Communism has never changed its goal, and that is to dominate the world. To achieve this goal, the Soviets spared no expense.

The United Nations was the most important institution for the Communists throughout the cold war. It was (and arguably is) literally the nest of spies.

KGB was the secret police force and the primary security agency for the Soviet Union.

KGB officers and spies all over the world were feverishly at work to expand the Communist agendas of the Soviet system and counter the efforts to stop the spread of Communism.

The UN charter grants almost total freedom of movement for all its members and employee to travel to any part of the United States without permission from the US government.

So, the UN provided perfect cover for the Soviets to under the cloak of diplomatic immunity, as civilians travel across the United States.

By facilitating other eastern bloc countries and their security and intelligence services, the Soviets had established a perfect network of spies.

Hede Massing was the best recruiter for the Soviets during her three decades of her service of the KGB.

During her years as a KGB spy, she recruited many high profile members of the United States government, in the State Department.

Hede eventually defected to the United States and provided the US government with invaluable information.

In an interview, she said:

“… my effectiveness is so closely married, connected to the Fascism.

I was effective because there was Fascism. And Fascism had to be fought. It took me a long time, and I didn’t want to realize it that actually, I was not fighting Fascism. It was baloney.“

“It would have been almost impossible to recruit the working class. Almost impossible. But it would be easy to recruit the intellectuals and middle class. The ideological approaches were best with the privileged in America. Great ideas. The freedom of all time. Marxism, a different economic system, thoughts.“

The truth is, most Americans are very naive politically. It was and still is, very easy for Communists to get in touch with influential Americans.

Elizabeth Bentley was a member of the Communist Party USA and a spy for the Soviet Union. She worked for the Communists from 1930 until 1945. In 1945 she defected the CPUSA and Soviet intelligence and reported her activities to the FBI. She exposed many high profile government officials. Among many names, she mentioned Alger Hiss.

Alger Hiss was an American government official accused in 1948 of spying for the Soviet Union in the 1930s. He was convicted of perjury in connection with this charge in 1950. Before the trial, he was involved in establishing the United Nations both as a US State Department official and as a UN official. In later life, he worked as a lecturer and author.

Hede Massing also mentions meetings with Alger. Today there is little doubt, if any, that Alger Hiss was in service of the KGB.

One could only look at Hiss’s life to realize where we can find the spies and traitors. The UN, academia, and within the United States government.

We must assume that today the situation is much worse.

“There is not Communism or Marxism in our ideas. Our political philosophy is a representative democracy and social justice in a well-planned economy.” Fidel Castro.

Cuban revolution began in July of 1953, and in December of 1958, Fidel Castro ousted President Fulgencio Batista.

A supposedly democratic movement later underwent reforms and became a Marxist-Leninist movement and, in 1965, a total Communist regime.

Soviets took full advantage of the Cuban revolution and its close proximity to the United States. Cuba became an important base from where they orchestrated many of their activities against the United States government.

Although in name, Cuba had an intelligence apparatus called DGI, it was the KGB in charge of the operations of the DGI.

In the mid-1960s, America’s black ghettos erupted in flames and violence in an apparently spontaneous protest.

The riots did not need instigations by outside elements. Yet, once the conditions were ripe, revolutionaries of the left moved in. They were funded and supported by the Cuban DGI.

“Resistance by every means necessary is happening and will continue to happen within the United States as well as around the world, and I remain committed to the struggle ahead.“

These were the words of Bernadine Dohrn in her trial in 1980.

In the 1960s, Dohrn was a leader of the Students for a Democratic Society’s “Weatherman” faction, which in 1969 went underground to become America’s first terrorist cult. The group’s intention was to shed their “white skin privilege” and launch a violent race war on behalf of Third World People.

During the 1960 and 1970, Weather Underground committed terrorist acts that resulted in death and harm to many innocent people.

Weatherman viewed the Cubans as being the vanguards of the International Communist revolution.

Cuba could bring out young people. The feeling of Communism with Mambo beats was different than anyplace else in the world.

It was the Communist Cuba that encouraged and financed the violent acts of the Weatherman.

The Weatherman started the Days of Rage in October 1968 was an attack on Chicago and its police department.

Dohrn and her domestic terrorist husband, William Ayers, are both close political and personal confidantes of President Barack Obama.

Among other radical and violent groups of the 60s was the Black Liberation Front, formed in Cuba in 1964.

The left focused its attention on recruiting from colleges and universities to rise to the US government’s highest level. Occupying the highest power positions to influence the government in a Socialist or Communist direction.

Many of the recruits from the 60s are career politicians for over 50 years in the US government’s most vital organizations.

Even domestic terrorists, Bernadine Dohrn and Bill Ayers are professors at the University of Illinois at Chicago!