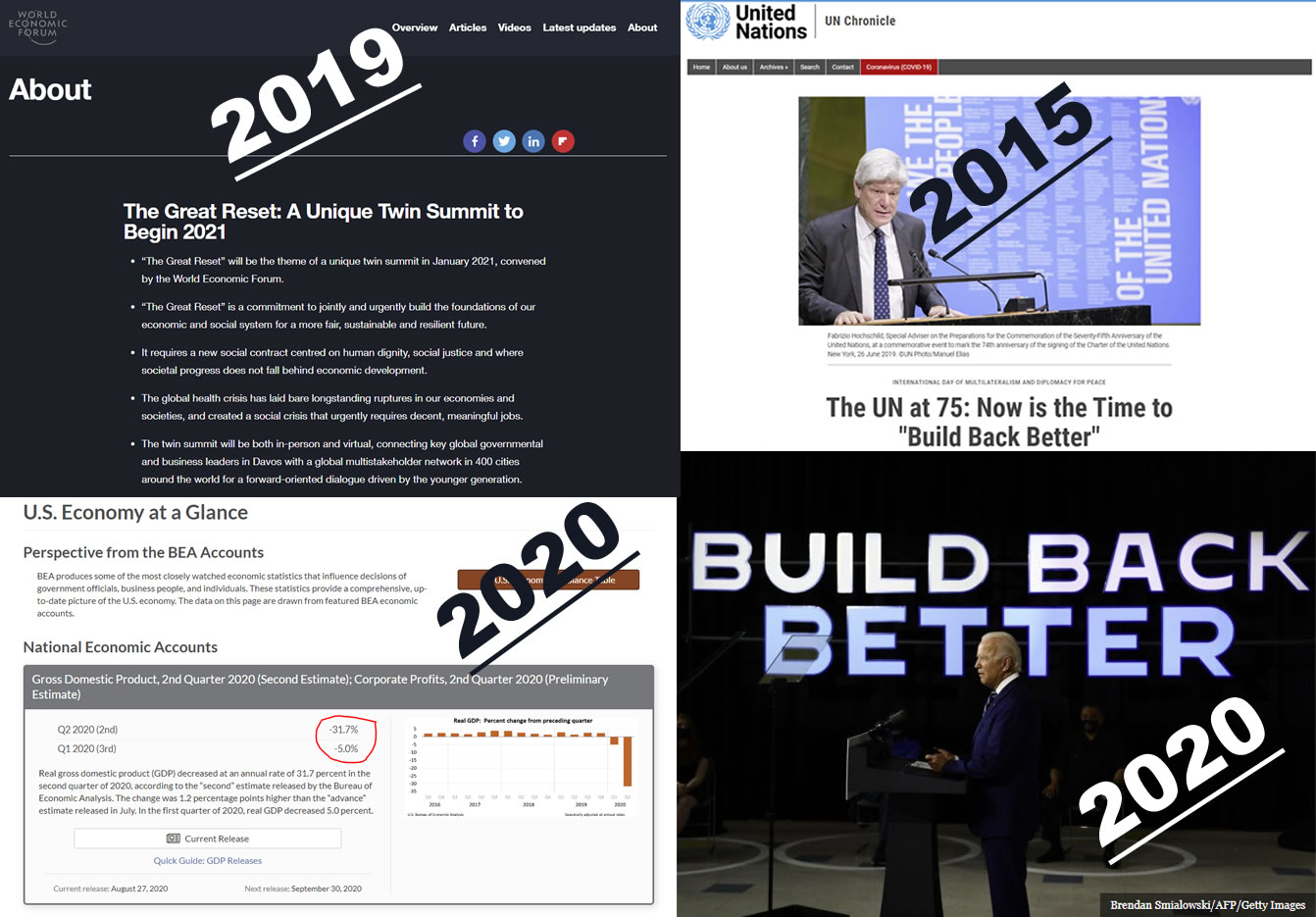 Joe Biden’s campaign has come up with Build Back Better tagline.

I know Joe Biden is in the habit of plagiarising, lying, and cheating, but this goes beyond that. Joe is merely a puppet in a Worldwide plan to dismantle the U.S. and the other major economies and “Build Back Better”!

The U.N. Build Back Better

The original “Build Back Better” plan is a 2015 U.N. initiative.

Building Back Better (BBB) is a program that was first officially used in the United Nations’ Sendai Framework for Disaster Risk Reduction document, which was agreed on at the Third U.N. World Conference on Disaster Risk Reduction held on March 14–18, 2015, in Sendai, Japan. The U.N. General Assembly adopted this document on June 3, 2015.

“The principle of ‘Build Back Better’ is generally understood to use the disaster as a trigger to create more resilient nations and societies than before. This was through the implementation of well-balanced disaster risk reduction measures, including physical restoration of infrastructure, revitalization of livelihood and economy/industry, and the restoration of local culture and environment”.

The concept was fully agreed as one of the most important concepts among each state’s delegates and embedded into the Sendai Framework.

The language is imperative when you are reading governmental and International. Consider the following from the Build Back Better:

“…use the disaster as a trigger to create more resilient nations and societies than before.“

WEF is another global organization with a global plan, and of course, a mission.

WEF talks about the 4th Industrial Revolution and, of course, “The Great Reset.”

“The Great Reset” is nothing but another name for the “Build Back Better.”

The Great Reset: A Unique Twin Summit to Begin 2021

“The Great Reset” will be the theme of a unique twin summit in January 2021, convened by the World Economic Forum.

“The Great Reset” is a commitment to jointly and urgently build the foundations of our economic and social system for a more fair, sustainable and resilient future.

It requires a new social contract centred on human dignity, social justice and where societal progress does not fall behind economic development.

The global health crisis has laid bare longstanding ruptures in our economies and societies, and created a social crisis that urgently requires decent, meaningful jobs.

The twin summit will be both in-person and virtual, connecting key global governmental and business leaders in Davos with a global multistakeholder network in 400 cities around the world for a forward-oriented dialogue driven by the younger generation.

Although both U.N. and the WEF are “International” organizations, their agenda is strangely aligned with the leftists and Marxists in general and the American left in particular.

WEF arrogantly talks about racism in the United States and supports violent organizations, such as BLM.

Joe Biden’s campaign running on the promise of “Build Back Better.” So far, you have seen that this slogan is a far-left, globalist scheme, and they use every asset they own to implement that fully.

The U.S. Bureau of Economic Analysis is the source of accurate and objective data about the nation’s economy.

To build back better, you must first destroy.

Let’s break this process down:

3- A worldwide lock-down imposed on every nation and its economy.

U.S. Economy shrank by 5% in the first quarter of 2020, and according to The U.S. Bureau of Economic Analysis (BEA), it will shrink another 31.7 in the second quarter.

European economies are also in trouble.

Even the Chinese economy has shrunk.

4- Total destruction and meltdown of the global economy is in order.

Every piece of the puzzle is nicely falling into place and the Elites will soon turn us into serfs and subjects under permanent surveillance.

A New World Order approaching fast, this new order is brutal, and muzzling us with masks is just the beginning of it.