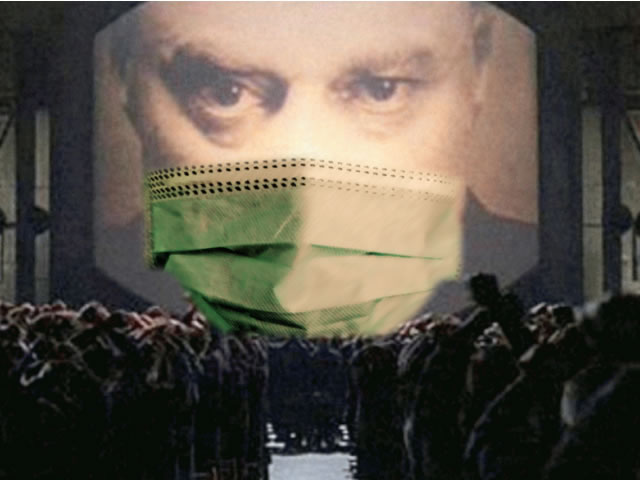 Every movement in human history started with an individual or a small group of determined people. A much larger group followed the core group, and a ripple effect took place, which at the end became a revolution.

Those at the center, almost and always, know more than other outward layers involved in a movement. The vast majority of those participating in movements are not aware of what they are doing or even want! They simply follow the mass!

Lenin calls them “The useful idiots.”

That’s why most revolutions, except for the American Revolution, gave birth to the tyrannical regimes.

As the Committee of Public Safety’s leading member from 1793, Robespierre encouraged the execution, mostly by guillotine, of more than 17,000 enemies of the Revolution.

Regardless of their motivations and aspirations, the leaders must know more than their followers. And the followers must need not understand what the leaders know!

Most revolutions, except for the American Revolution, gave birth to the tyrannical regimes

No soldier ever knows what his general knows.

Compartmentalization is the act of limiting access to information to persons or other entities who need to know it to perform specific tasks.

In other words, you know just enough to do your job.

The same is correct in the world of conspiratorial and clandestine operations. The outer layers of an organization may not even know that they are accomplices in a well-thought plan.

Compartmentalization is vital in the handling of classified information in military and intelligence applications.

Compartmentalization is the method by which any large scale operation could be planned and executed.

Imagine a pile of 1000 puzzle pieces on a table.

Imagine a group of 1000 participants who each pick one puzzle piece and slide it under a door.

There is another group of people who match every two puzzle pieces behind the first door and slide it under the second door, so on and so forth.

Those behind the last inner door will see the full picture of the complete puzzle. The farther from the inner door we move, the less information becomes available.

Looking at the example above, we understand that planners, master manipulators, and schemers are comfortably watching as their plan (the 1000-piece puzzle) is coming together with absolutely no efforts. No one can even know or see them. They designed the puzzle!

Needless to say that the final product, or puzzle in our example, could be entirely vile and evil.

When it comes to plot at a worldwide scale, you may think compartmentalization becomes overtly hard or even impossible because we are talking about many sovereign nations and governments. Not to mention the animosities amongst the countries.

That’s where international organizations, such as the United Nations, the International Monetary Fund, World Bank, World Trade Organization, and countless others, come to play their role.

Each organization is comprised of multiple committees, councils, agencies, and departments.

Take, WHO, for example.

“The World Health Organization (WHO) is a specialized agency of the United Nations responsible for international public health.“

It’s evident that not all UN members, and consequently WHO members, carry the same weight.

Countries like the United States and China easily outweigh the majority of the members. They can easily influence the process of decision making.

To plan a global conspiracy, you will need to control the International Organizations’ heads, such as the UN, WHO, WTO, WMF, and so on.

Every International organization can and will play a role in global decisions, but the question should be the whose decision?

In the case of global scale compartmentalization, the plot must be initiated from a worldwide organization to transcend borders, nations, cultures, and governments.

Instigators of a global plot recruit heads of necessary international organizations; they have put them in place for when they need them.

For the most part, those who achieve high positions in any International Organization are corrupt, greedy, and sellouts. They are always significant players in global manipulations.

Take a look at the current secretary-general of the WHO, Tedros Adhanom Ghebreyesus.

He is not from a medical background. He was pushed to his position by China, AKA Chinese Communist Party (CCP).

He was a senior member of the Tigray People’s Liberation Front (TPLF). He was personally responsible for the brutal repression of the Amhara people. Using aid money selectively to starve them out and deny them access to essential services.

You can read more about him here.

By no means, such a person should be the head of the World Health Organization! In fact, by installing him, the CCP made a mockery of the International community!

The ongoing war in Iraq and Afghanistan started in the UN and UN security council. They sold the Weapon of Mass Destruction story to the entire world!

Once the elites agree upon unleashing a new plague, their henchmen in high places pull the trigger.

The sad part is that there is no accountability for any of these characters, even when their actions result in significant harm to millions of people, or even death.

The next actor in this compartmentalized plan is media.

Once an International Organization, launched the plan, media begin their work by disseminating information about the dire threats and spread the fear on an unimaginable level.

By Media, I mean the so-called Mainstream media. TV, Press, and Internet are entirely in control of the global elites.

It does not take long to research who’s who in news media corporations to realize that we are dealing with an extensive family. Although they may, at times, contradict each other or advocate for different sides of the political charades.

There are countless montages of news from different networks, in which you see how they all promote the same message.

The Internet is almost wholly in the grasp of a few high tech companies.

Take Google, for example. It knows what you search, what you buy, what you like, what you dislike, where you go, how much you owe (the pic from Godaddy), when you go to sleep and when you wake up, what’s your favorite food, and of course, what’s your political inclination!

If you have a Google Home Smart Assistant, you are not very smart!

Most high tech companies are in control of people who have proven their loyalty, not to the people, but to the global elites.

Google works with China to suppress search results in China. They censor anything and everything that goes against the “accepted narrative” with impunity.

Internet is literally in chains woven by the tech companies. These giants police our thoughts, form our opinions, and sway our votes to achieve what they think is better for everybody!

Internet is literally in chains woven by the tech companies.

The sad truth is that we, the people, trust these monsters.

“War is peace, freedom is slavery, and ignorance is strength.”

They want us to believe that the collective of high tech will assimilate us, and our resistance is futile.

International organizations hand-in-hand with the news media build, control, and propagate approved propaganda by the elites.

Governments, at all levels, are either infiltrated or entirely controlled by the agents of the elites.

In a free country such as the United States, the federal government exerts power over the state and local governments. But states have a great deal of independence.

Whether you live in a Blue State or a Red State, your local government conspires with the planners, as long as it fits the narrative of their party.

In the case of the invasion of Iraq, most Red States followed the federal government lead. In the current pandemic, all the Blue States are pushing the narrative, brought forth by the elites!

Ironically, elites are neither loyal, nor belong to any party or population!

Governments take full advantage of the fear factor when it comes to enforcing a new scheme. Especially if there is no push back from the citizenry of the country.

You have been had

For most people, the trap is closed. They have blind faith in both government and the media.

“You have to understand, most of these people are not ready to be unplugged. And many of them are so inert, so hopelessly dependent on the system that they will fight to protect it.“

It depends on the plot, the next cog in the vast machinery of thought control turns and plays its role in forming our extremely malleable minds.

It could be doctors and nurses in case of a pandemic. It could be meteorologists and climate scientists in case of global warming or even a 16-year-old girl!

The radio talk show, and late-night TV show hosts to push for war or wear masks and get the new and untested vaccine.

The job is done.

We turn against each other. The same old story of divide and conquer.

I am sure we have surprised our overlords. If they were happy to see we wear masks, we wear masks and shields and gloves. If they tell us to stay 6 feet apart, we stay miles apart.

The human psyche has been invaded for so long that it does not take much to control us anymore. The human behavior has become so predictable to the elites that they dare to treat us like their drones.

I leave the rest to the late George Carline